Within MEMO2 we measured methane in several European cities, such as London, Paris, and Hamburg. The same we are now doing in Bucharest, the capital of Romania.

Urban cities are important targets for greenhouse gas emissions mitigation as they constitute emission hotspots. An important source are the fugitive emissions from engineered systems such as natural gas pipelines. CH4 mitigation in cities is beneficial for several reasons. One the one hand it is the reduction of an economic commodity. Besides this, high concentrations of CH4 are also a safety hazard as it poses an explosion risk and reduce air quality 1.

Due to logistical reasons – accessibility of the city, availability of instruments – this part of ROMEO has been started already in August. Julianne Fernandez from Royal Holloway, University of London (RHUL), together with her colleagues James France, also from RHUL, and Hossein Maazallahi from Utrecht University went to Bucharest in mid August to measure CH4 and take samples for isotopic analysis. So we get an idea about the local emissions and also the sources of the CH4.

All practical work (should) start with brainstorming and preparation.

For practical and also safety reasons we decided to hire local drivers. They know the city and also the traffic rules, and the scientists can completely focus on the measurements. As we are doing mobile measurements, it is important to ensure that the instruments are safely fixed in the cars – although we are driving relatively slow. Another important issue is, that the driver is not able to monitor the results while driving. For this reason, laptops and monitors are not in the front of the car but on the back seat and the drivers can focus on the traffic. For a scientist it is a very unpopular task being the driver, as we are always curious about the outcomes of the measurements. But safety first!

So Juli, James and Hossein are cruising through Bucharest to ensure comprehensive measurements and emission monitoring of the city. As colourless and odourless gas, CH4 can only be spotted with adequate instruments. For reliable interpretation of the results afterwards, we do need not only the CH4 measurements, but also relevant so-called “meta-data”. This includes for our measurements meteorological data such as wind force and direction, temperature, but also geographical data via GPS logger. Meta-data are indispensable, and the more the better. And last but not least, also simple pictures can be a useful tool to remember locations and events, and by this can help to interpret the obtained data. 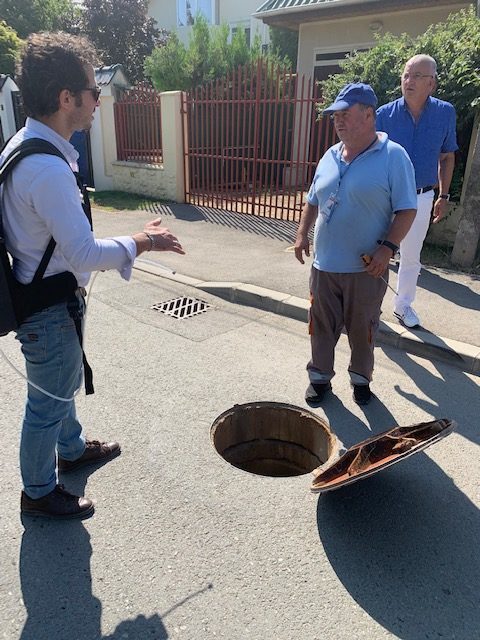 During the campaign in Bucharest, our preliminary data already helped to directly take action. At one location Juli spotted a very high CH4 concentration, indicating a leakage of a gas pipeline. So based one the first results at this location, the team initialized a collaboration with the local gas industry to check and take action. So a great example of unintentionally applied science!