Imagine the difficult and the impossible!

Let’s play: During our 2nd MEMO2 school about “Methane and society” in France, the exercise for our students was to figure parties to the United Nations Framework Convention on Climate Change (UNFCCC).

In real life, the parties to the convention meet annually to assess progress in dealing with climate change. A huge breakthrough was made some years ago in Paris at the 21st Conference of Parties, better known as the COP21. The conference negotiated the Paris Agreement, a global agreement on the reduction of greenhouse gases and climate change. The Paris Agreement represents a consensus of the representatives of the 196 countries attending it. Have you ever negotiated the television program at home with your kids? Imaging now, how difficult it is to get all parties together and the impossibility to please them all! Different interests, abilities, facilities, cultures need to be reconciled. Not to forget national priorities and perceptions. And yes, also the personality of the person negotiating can make a or even THE difference! A challenge, which our students faced in a short role play, using the World Climate Simulation of ClimateInteractive (https://croadsworldclimate.climateinteractive.org). 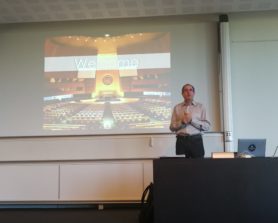 Philippe Bousquet from UVSQ took the role of the convention president, and the students represented a country or region. They discussed and negotiated their national contributions to mitigate climate change and by this help reducing the global greenhouse gas emissions, first on national level, then in bi-lateral and finally in plenary discussions. They made a 1st restitution of propositions, and after some more group work to revise their propositions and continuing negotiations with the other “countries”, they presented their final propositions to limit global warming to 2°C.

Unfortunate for the climate, they ended up at an unfavorable temperature reduction of only 2.7 °C. They got an idea how to argue when defending the interests of their country by (hopefully) keeping the global need to reduce the emissions of greenhouse gases in mind. And they realized how difficult such negotiations are.

It was a very useful, interesting, and interactive start of the 2nd MEMO2 school, which was dedicated to societal challenges around climate change in general and methane in particular. During the next days, we continued working on this challenge: next to this role play, students learned about several relevant topics when dealing with societal aspects of climate change.

Climate change in the context of economics and human rights

Beside scientific aspects, one questions always is: how much does climate change costs (or might cost)? This is a question which is very important for all negotiations. It is all about money, right? But which costs can we expect, depending on different future scenarios? Which parameters do we have to consider when calculating “the” costs? And who will pay the price? The students got a first overview of the economic reading of climate change and its drivers, given by Patrick Schembri from the UVSQ.

Patrick presented the various forms of interdependencies between economic activities and climate change, with a focus on methane emissions. Based on the main drivers, the ESRs developed socioeconomic scenarios for their countries by quantifying the players and defining growth rates over the next decades, using the ECOMET model. So they saw the different economic needs and potentials of their countries, which have to be taken into account when negotiating their contributions.

Another question was about perceptions people have or might have on climate change. What would it take for people to perceive methane emissions as something that matters? From Jean-Paul Vanderlinden from UVSQ we learned, that the social aspect behind it clearly matters, so think not only about “scientific” knowledge, but also “social” knowledge and collective influences, cultural backgrounds, individual experiences, values and interests.

We learned that just “learning” the scientific facts is not enough! It is a magic triangle of normative, pertinence and evidence claims. After the theoretical introduction we searched the verbal expressions of these claims in different press clippings, to get a feeling of how to situate scientific knowledge within the world of perception.

Climate change in the media

This was also a good preparation for the following lecture about “How to deal with media?” Scientists in the field of climate change often have to deal with doubting people, people who have absolutely no clue about the subject, comparable to people thinking the world is flat or doubting the benefit of vaccination. So how to talk to people which are ignoring the scientific common knowledge? Should we talk to them anyway? Or better not? And what to keep in mind when talking to journalists, who just want to get a hot topic and might turn around what we are saying? 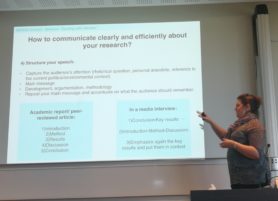 Celia Sapart form the FRS-FNRS in Brussels showed us, that scientists and journalists think, work and communicate in different ways – generalists versus specialists. During this session, we learned how to deal with these differences, how to understand and anticipate it, how to organize and structure our presentations to ensure an effective communication with respect to different audiences.And by this to improve our blogs.

Celia gave the lecture together with two journalists: Aude MASSIOT from the French daily newspaper Libération, and Élise Racque from the French weekly magazine Télérama. They showed the ESRs how important it is to choose the right angle for their stories. They also made individual radio interviews simulations with our students – which was for some clearly an experience out of their comfort zone!

The third day started with an overview of obligations countries have committed to by signing the Paris Agreement.

They had to explain their reasoning behind the plan and how their plan reflects the constraints and information provided. To get them in the right spirit, Bill invited them to a very convincing thumb-wrestling exercise, showing that collaboration is much more productive than competition! And it clearly worked out! 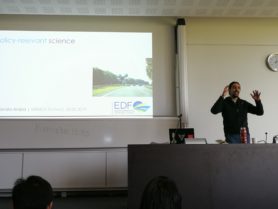 The closing lecture, dedicated to policy and policy-relevant emission data, was given by Daniel Zavala-Araiza from the Environmental Defense Fund (EDF). For us as scientists it is not only the pay-off by good scientific results which drives us. It is also the idea that our many and many hours spend on our passion (sometimes it is also called work) will lead to changing the world. 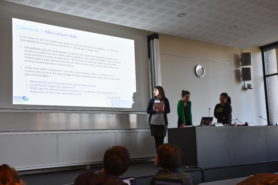 Or at least to initiate something which might have the potential for it. But for this it is important that we let the world (and the policy makers) know, what we are doing and why we are doing it and also what we have found out. Thus, in the last activity the ESRs were faced with recent real-world case studies where quick response of researchers was needed. The activity highlighted the role of policy-relevant measurement data and the necessary process to communicate results to a diversity of stakeholders.

To summarize these three days: it was fun, and it was fun, and it was extremely interesting. We learned a lot (including me, although not an ESR anymore) and by this a very big thanks to Philippe, Isabelle, Camille, Sara and Barbara as organisers of the school and to all lecturers, who made this unique event happen!